Virgin Orbit first attempted a test launch on Monday with LauncherOne, a rocket launch from the wing of what is named the ‘Cosmic Girl’ aircraft. The mission was unsuccessful.

The launch came to an early end for reasons unknown, shortly after the missile released from the aircraft. The plane has landed safely again. Cosmic Girl flew above the Pacific Ocean and climbed to an altitude of 10 kilometers. Over the Pacific, the aircraft began to fly in circles while all systems were being checked. The green light was given for the launch around 9:45 pm. Shortly after, the plane released LauncherOne and ignited the engine, but minutes later the mission ended prematurely. Failed to get the rocket into space.

The launch was supposed to take place on Sunday but was postponed due to a sensor failure. Before the launch, Virgin Orbit said to prepare for a failure, because it is not often that the first flight of a new launch vehicle goes well. The plane and rocket took off from the Mojave Desert in the U.S. state of Nevada.

A rocket is mainly launched from a flying aircraft to save expensive energy/rocket fuel. At about the first 10 kilometers of the atmosphere, the troposphere is the most airtight. It, therefore, takes a lot of energy to pierce this layer with a rocket.

By flying above the troposphere with an airplane, this layer can be skipped. Then, for example, less fuel is needed for the entire launch than with a launch from the ground. On the other hand, the rocket and he load cannot be too big, otherwise, the aircraft can no longer safely take off to the air. 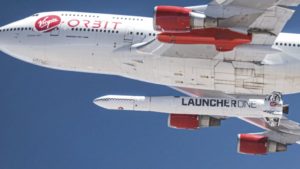 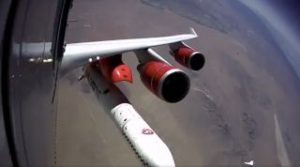