This is a very unusual period of time in PMDG’s history- as we have TWO products, on TWO different platforms winding down development at the same time.

The PMDG DC-6 Cloudmaster is just about to wrap up beta testing on the X-Plane version, and the PMDG 747-400 Queen of the Skies II is very close to entering beta testing, which will start the wind down to release.  Today, I am going to publish two update threads for you- one dedicated to the DC-6, and the other to the 747.  Before we do that, however- just a quick note for those of you who pay attention to such things: Today is Mother’s Day.  Just a reminder from your friends here at PMDG.

Now where was I?

First up, lets talk a bit about the pending release of the PMDG 747-400 Queen of the Skies II product line:

We have been pretty quiet about the progress of this product because we have been very deep into the mechanics of pushing the airplane toward the beta testing phase of development.  We thought back in the October/November time-frame that we would be into beta testing by Christmas 2015, but some key pieces to the project fell behind schedule and that slowed the integration process quite a bit.

While we could have pushed her out to the beta team some time ago, it seemed rather pointless to move in that direction if we weren’t yet happy with the product- so we have just remained head-down in pursuit of our usual product quality goal without giving too much consideration to the calendar.  (Ah!  A case study in why we never discuss release dates, how ‘bout that?!)

As we roll through the next couple of updates, we are going to give you a showcase of the individual 747-400 models that are included in the package, along with some interesting features that are sure to raise your realism level to all new heights.  I do want to point out that there are some features and new gizmos that we are intentionally not showing you- because we want to keep them under wraps until we are ready to release the product to you.  You know how it is- we always manage to come up with something new and interesting in each successive product line-  this one will prove to be no different!

I always like to start with a good, dramatic 747 image- and this one is my current favorite.  This image evokes everything that I think we all love about the 744:  The power, the span, the graceful lines, the incredible complexity of flap and gear arrangement…

Of course- this image also tickles the nerve endings of the former Chief Pilot in me…  I will probably need to have a discussion with dispatch about the balanced field length calculation on this departure since the airplane is barely into the second stage climb crossing the piano keys…  Hmmm…. 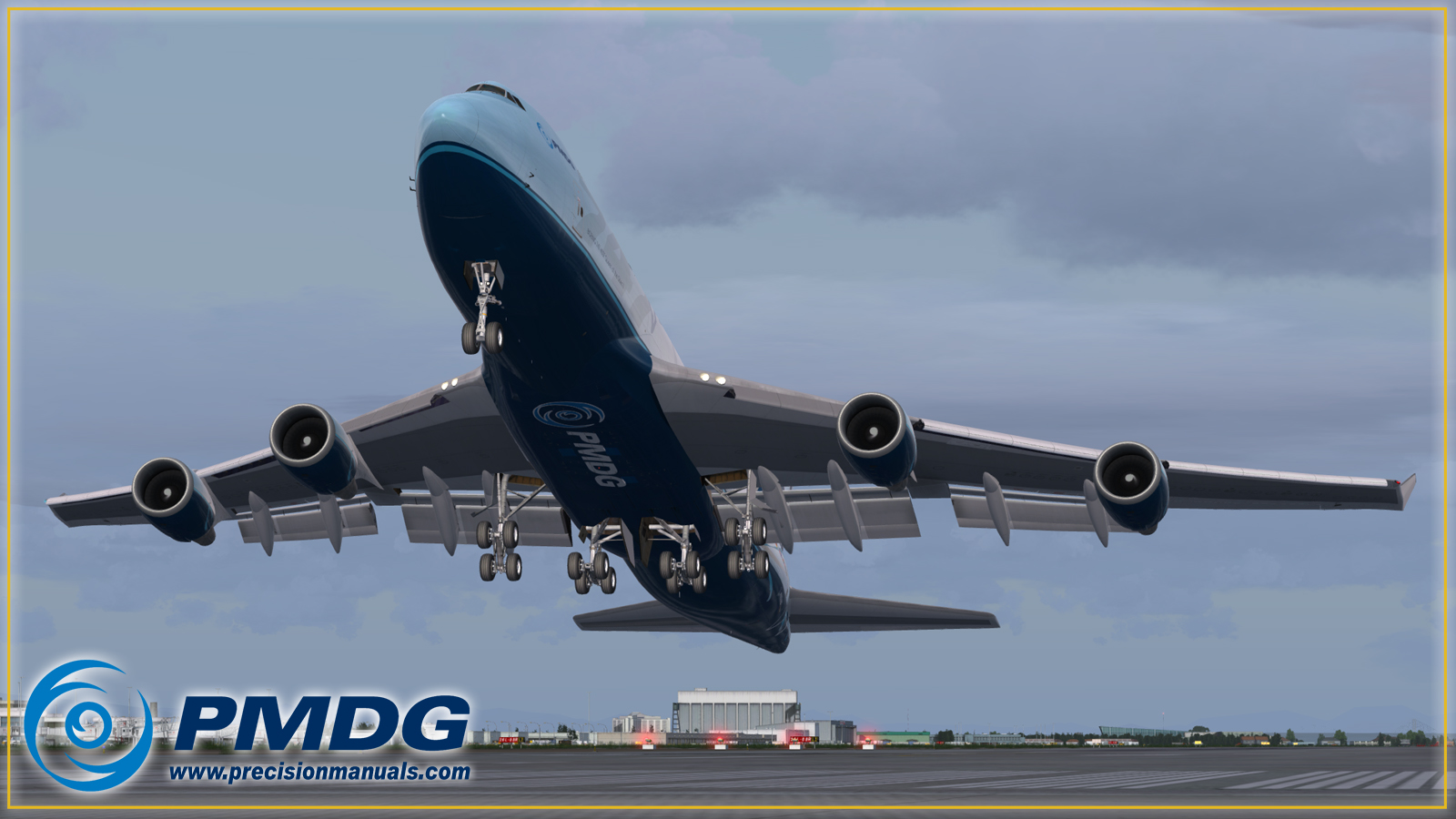 Next up, we have a few images taken slightly earlier in the day, before we started hurling people out the top floor windows of the PMDG Flight Dispatch Center. 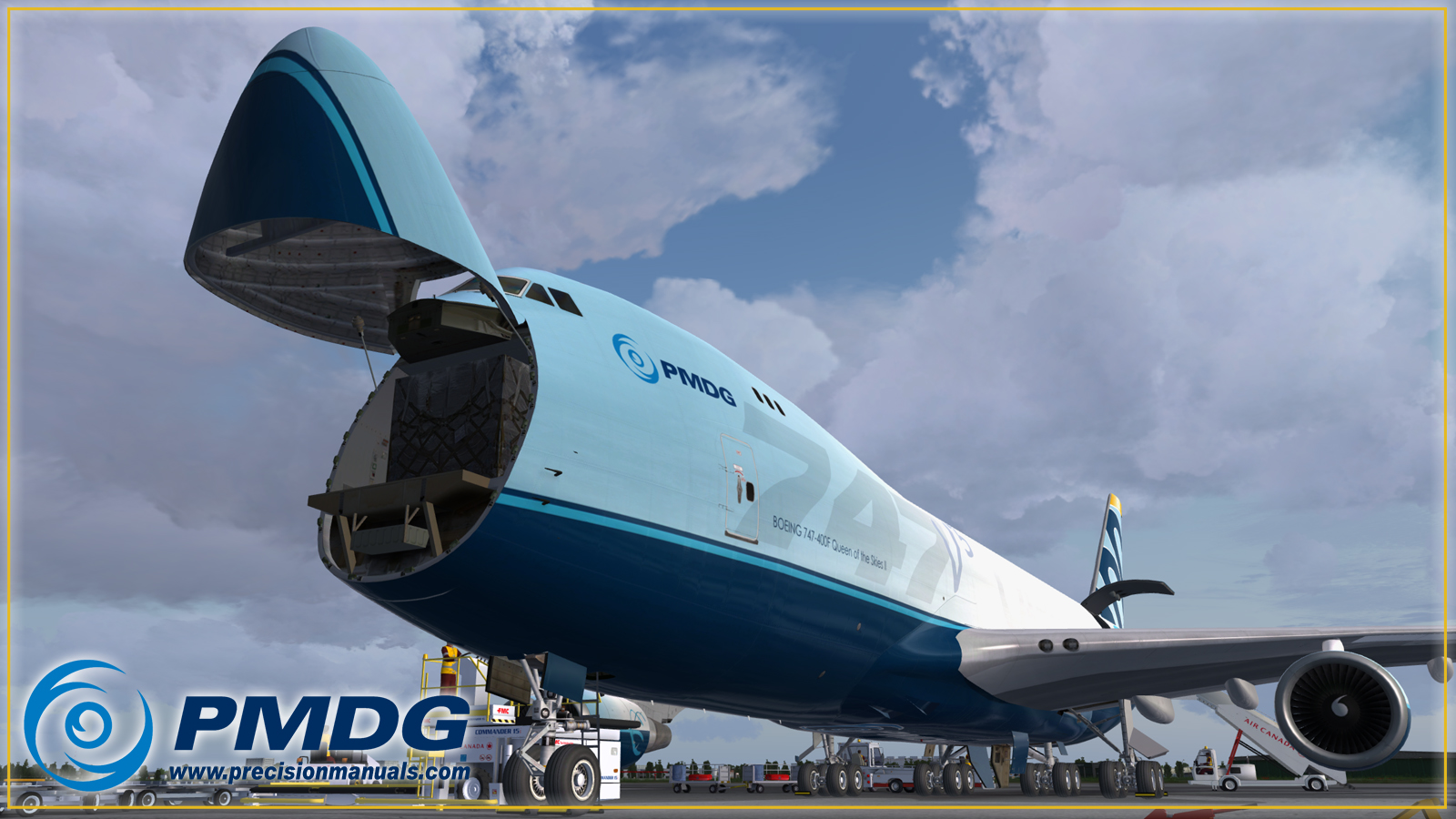 Here the PMDG 747-400F is poised on the cargo ramp, displaying the quality and attention to detail of her lines.  A tremendous amount of time and effort has been put into making certain that all of the details are present.  Of course it is also animated correctly, including animation processes that take into account the size and mass of parts being moved.  Simply throwing a part through a bunch of key-fames to make it move doesn’t really cut it for a PMDG product- instead we have put a significant amount of effort into modeling organic animations that take into account what is being animated, how it is moved and how interacts with the world around it.

When you see things like the gear, flaps, nose cargo and side cargo door in operation, you will understand what we mean.  No effort has been spared to make it look and act like the airplane you see parked on the ramps of the world’s airports. 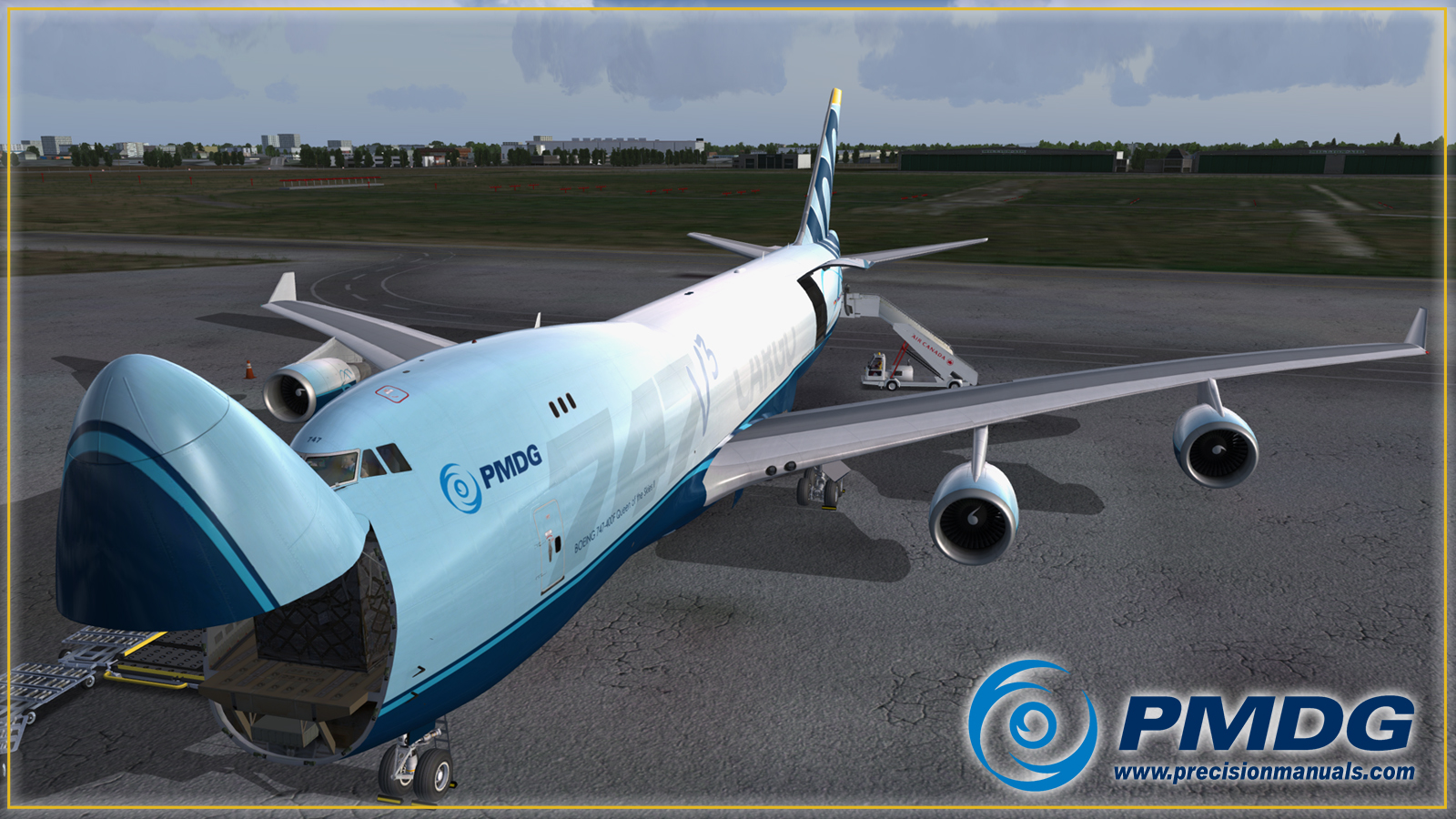 Seen from the side, you get a good view of this engine type on the 400F, with the doors open to display her working phase.  You will note that we apparently have a slight left-to-right breeze that has pushed the rudder over since the hydraulic systems are depressurized while the airplane is parked for servicing.  The left outboard elevator has started to bleed trapped pressure and is beginning to sag, but the inboard hydraulic system is a bit tighter and hasn’t yet begun to sag.

Note the yellow tail band at the top of the vertical stabilizer-  the yellow band indicates that these images were take with the FSX version.  We will hopefully begin to preview the P3D version shortly- as we have just recently gotten the P3D version stable and usable… 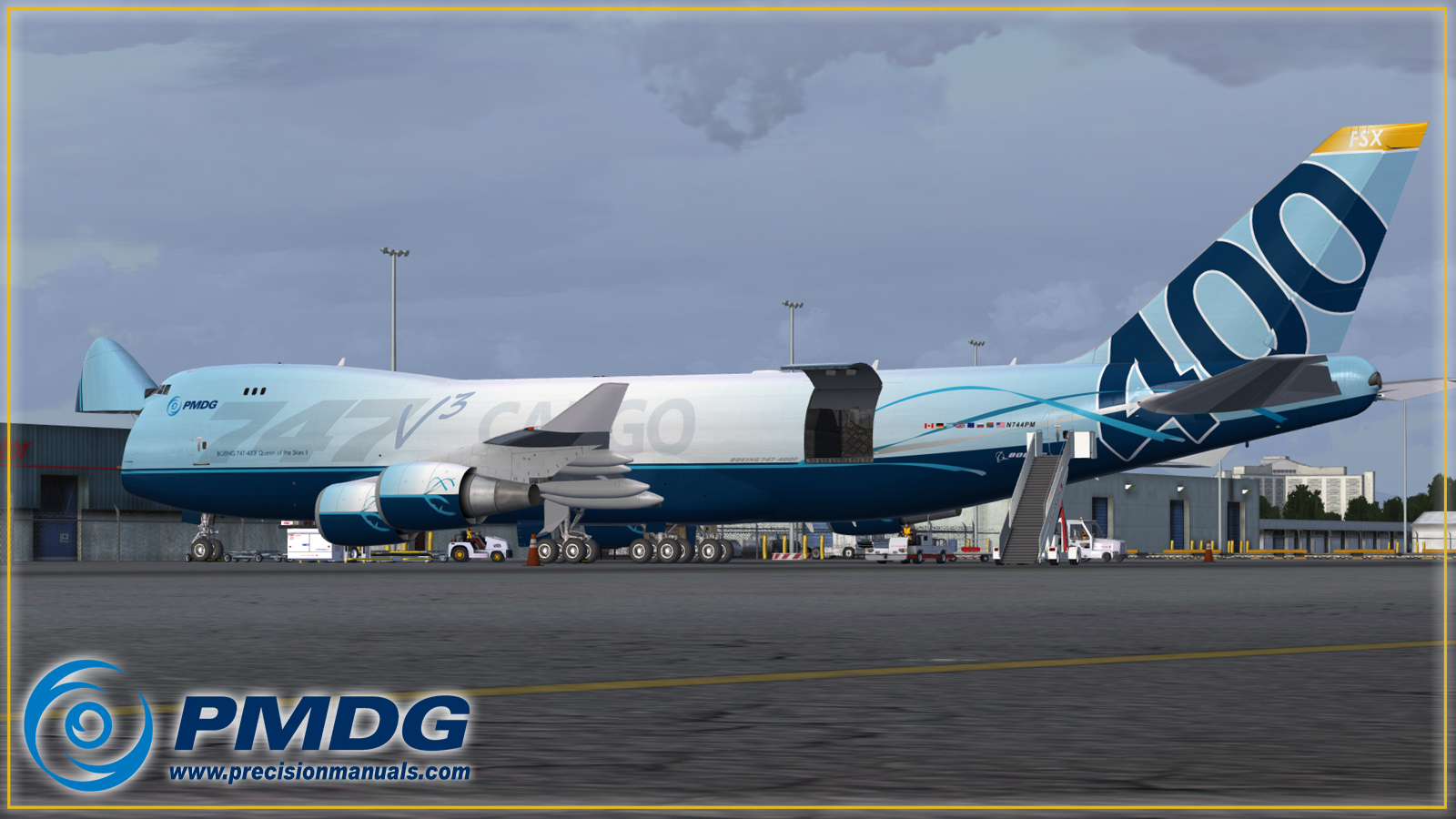 Which leads us right back to where we started:  The PMDG 747-400F Queen of the Skies II launching off into the twilight for another night of hauling the mail and freight. 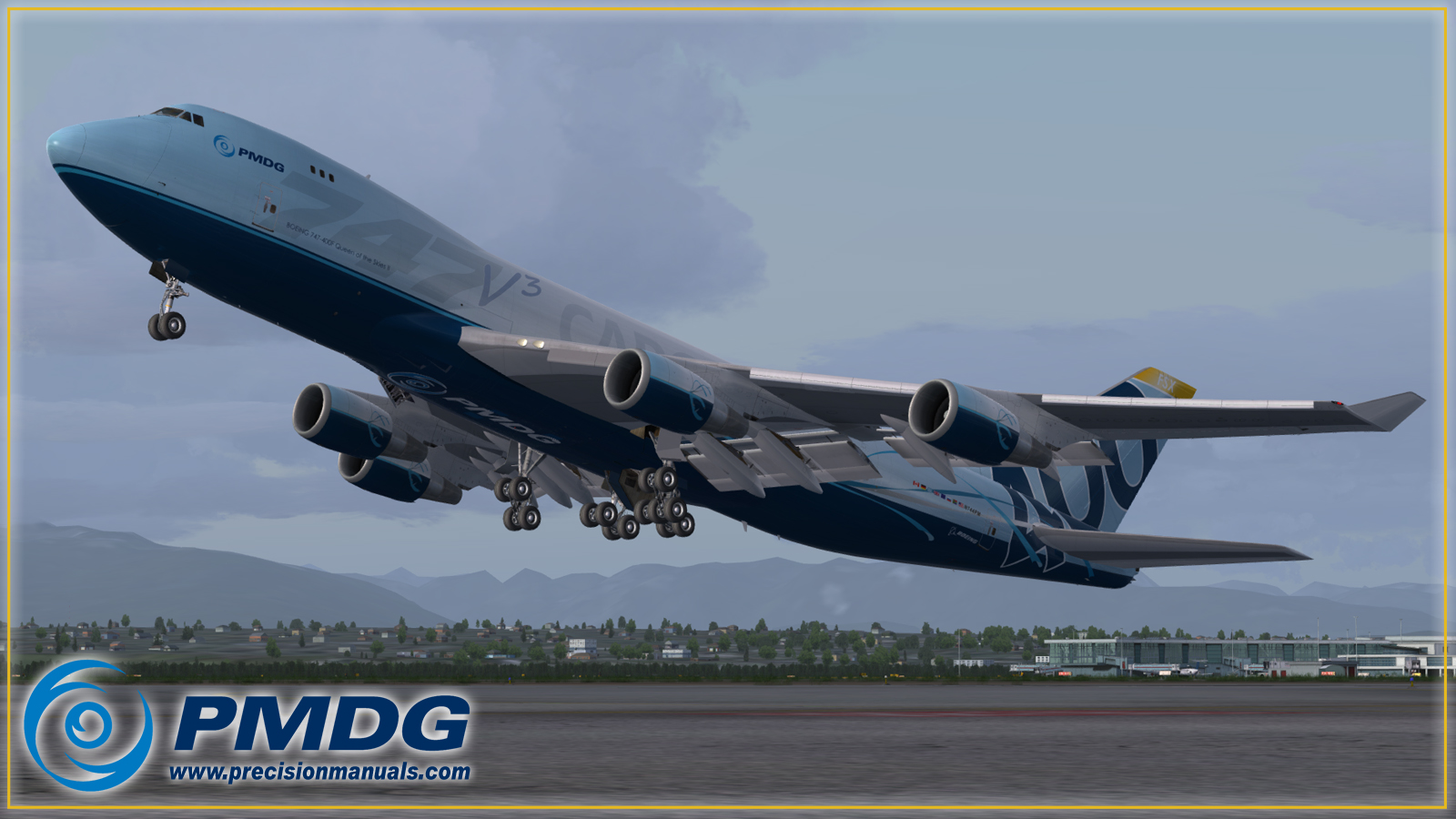 Oh- one last closing detail:  The astute among you will notice that we are not calling this product “V2.”

Back in January when we were building the first all-up installation test for this product, we discovered that we had a versioning problem.  Our original FS9-based 747-400, was v1.0 of the 747 for PMDG, and it was called “The Queen of the Skies.”

When we switched to FSX development, we dropped the “Queen of the Skies” moniker in order to help customers differentiate between the FSX and FS9 versions, instead calling the FSX version the “PMDG 747-400X.”  This was also put into place as “V2.0”

So…  That makes this one v3.0….  but we have brought back her proper moniker as “Queen of the Skies II.”